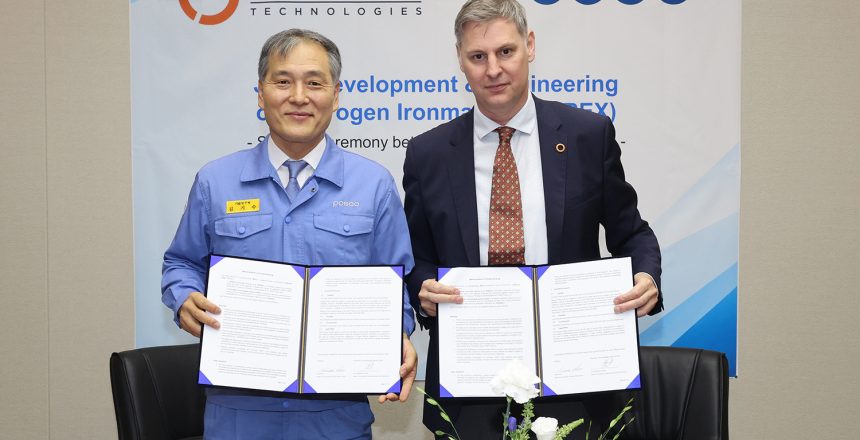 Ki-soo Kim, Head of POSCO’s Low-Carbon Process R&D Center said, “Cooperation across industrial sectors such as raw materials, engineering, and hydrogen is important mainly for steel companies for the development of eco-friendly hydrogen reduction steelmaking technology. I hope to see creative and successful technology development based on the technologies of both companies.”

POSCO plans to achieve carbon neutrality by 2050 through its ‘HyREX (Hydrogen Reduction)’ technology, a unique eco-friendly hydrogen reduction steelmaking model. To this end, the company decided to start designing the HyREX demonstration plant in earnest from this month with Primetals, which jointly designed the FINEX facilities with POSCO.

Starting with this design, POSCO plans to continue the demonstration plant EPC (Engineering, Procurement, Construction) and verify the commercial feasibility of hydrogen reduction steelmaking by 2030 in the medium term. After that, the company plans to achieve carbon neutrality by 2050 by gradually replacing the current blast furnace with HyREX-based facilities after optimizing production.

Hydrogen reduction steelmaking is a technology that uses 100% hydrogen to make Direct Reduced Iron (DRI) and melts it in an electric furnace to produce molten iron. Since there is no carbon emission in the process, it is considered a solution for carbon neutrality in the steel industry.

POSCO is currently operating a FINEX facility that uses reducing gas containing 25% hydrogen and is developing HyREX, a POSCO-type hydrogen reduction steelmaking model based on FINEX technology. FINEX is the world’s first innovative technology that POSCO succeeded in commercializing in 2007.

It is a method that uses iron ore and coal, the raw materials for ironmaking, in powder form without the sintering and coking process which make raw materials into lumps. HyREX will also follow the method of reducing iron ore by directly contacting it with hydrogen in a powdery spectral state. In the case of the hydrogen reduction steelmaking model ‘shaft furnace’, which is being developed by major overseas steelmakers, iron ore must be processed into pellets that are hard lumps. However, HyREX can omit that process and use relatively low-grade ore, which is expected to be advantageous in terms of cost competitiveness.

Aashish Gupta, Executive Vice President of Primetals said, “HyREX technology could be a long-term and fundamental solution in many areas where pellets are difficult to use because it directly use iron ore fines. Let’s write a new success story based on our experience of working together to succeed in FINEX.”