In the era of net-zero carbon, the steel industry faces a big challenge. Externally, the demand by the market and customers for low-carbon products is increasing every year amid the crisis of global warming, while the development of new technologies and large facility investments are required internally to reduce the carbon generated in the steelmaking process.

Steelmaking processes that have been used for decades should be converted to a low-carbon system from equipment to technology and materials, so it is not an exaggeration to say that the “survival” of steel companies depends on net-zero carbon. In the series on the “Great Conversion to Low-carbon Eco-friendly Steelmaking Process,” POSCO is promoting to achieve the goal of “net-zero carbon 2050,” such as the development of hydrogen reduction steelmaking, expansion of renewable energy, and CCS, to find a way to “survive.”

HyREX (Hydrogen Reduction) is a steelmaking method that manufactures molten metal using iron ore fines and hydrogen based on the FINEX fluidized reduction technology POSCO has.

Plan for Commercialisation of HyREX

POSCO will build a test facility with annual production of a million tons in Pohang Works by 2028 in cooperation with the government and Korean steel companies to confirm the possibility of commercialisation of HyREX technology, a hydrogen reduction steelmaking method based on FINEX fluidized bed reduction reactor technology.

Also, process technology for a new electric furnace dedicated to hydrogen reduction steelmaking is being developed. DRI made of fossil fuel has a small amount of carbon due to carburization reaction. If DRI has carbon, the melting point of iron (Fe) is lowered by 200~300℃ from 1538℃, making melting easier. On the other hand, DRI produced using 100% hydrogen has no carbon at all, and melting is relatively difficult. Therefore, there is a need to develop a new type of electric furnace technology that is different from existing electric furnaces.

However, POSCO plans to enter the demonstration stage from 2025 without a pilot stage and verify HyREX technology in 2030 based on its technologies and experience from FINEX process development. Also, POSCO will achieve “net-zero carbon 2050” by converting existing blast furnaces in the Pohang and Gwangyang steelworks to hydrogen reduction steelmaking in a phased manner by 2050. 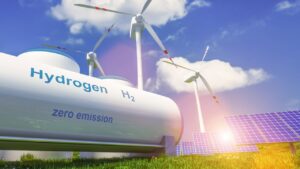 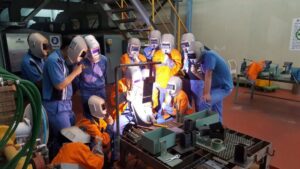 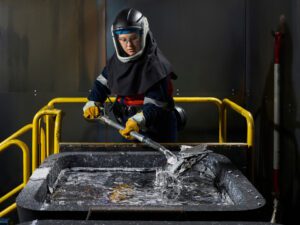