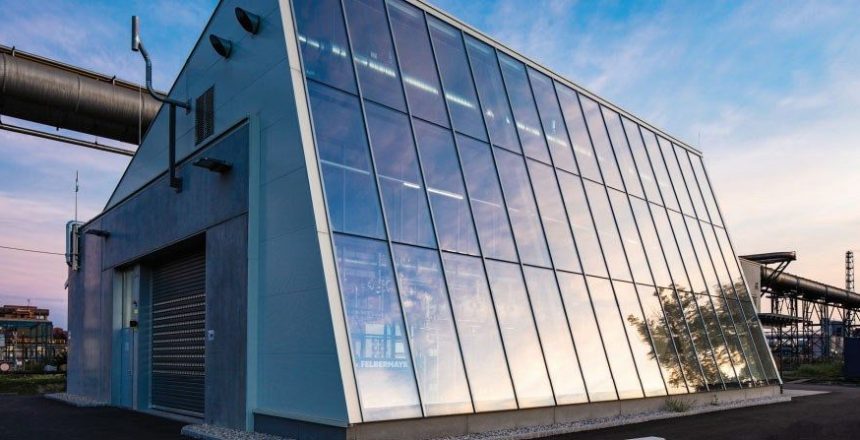 Global climate goals aim to almost completely eliminate CO2 emissions by 2050. This poses challenges for industrial enterprises and energy suppliers, and demands new technological solutions in both sectors. In this context, CO2– neutral ‘green’ hydrogen is regarded as the most promising future option for facilitating the energy transition. Now the world’s largest and most advanced electrolyser has commenced production of green hydrogen at the voestalpine premises in Linz. The new plant has a capacity of over 6 megawatts, and is currently regarded as the most effective and state-of-the-art facility of its type. It will be used to test whether the technology deployed to produce green hydrogen is suitable for use on an industrial scale. Furthermore, the project, which receives EUR 18 million in EU funding, will investigate the potential to provide network services, and potentially compensate for fluctuations in the power grid.
The core of the new plant is a highly dynamic proton exchange membrane electrolyser with a capacity of 6 Mw. The plant produces 1,200m3 of hydrogen per hour.

voestalpine is following a consistent, long-term strategy of decarbonizing the steel production process. “We have set ourselves a clear goal of greater direct avoidance of CO2 emissions in steel manufacturing over the coming years. With the start of operations at the world’s largest hydrogen pilot plant at our site in Linz, we have taken a significant step towards driving this technological transformation,” says Herbert Eibensteiner, Chairman of the Management Board of voestalpine AG.
In light of global climate targets, voestalpine is currently investigating the practicality of a hybrid technology to bridge between the existing coke/coalbased blast furnace route and electric arc furnaces powered with green electricity partly generated using green hydrogen. If economically feasible, from today’s perspective this option would reduce the Group’s CO2 emissions by around a third sometime between 2030 and 2035. Over the long-term, voestalpine is striving to successively increase the use of green hydrogen in the steel production process, allowing the Group to reduce its CO2 emissions by over 80% by 2050.
“The most important precondition for scenario planning based on green electricity and green hydrogen is, however, sufficient quantities of renewable energy available at commercially realistic prices. This is the only way in which we can apply tomorrow’s technologies in a truly competitive manner,” Eibensteiner adds.

Decarbonizing the economic and energy system is a key challenge for the future. For that reason, industry requires new processes and novel technologies, such as using electrolysis to generate green hydrogen from renewable energies, in order to achieve the longterm climate goals.
“This plant uses renewable energy to split water into its constituent parts, hydrogen and oxygen. The process creates a huge potential to decarbonize the energy and economic system and make it more flexible,” explains Wolfgang Hesoun, Chairman of the Management Board of Siemens AG Österreich (Siemens Austria).

In addition, electrolysis can also be used to support the power grid, by extracting excess power from the grid as required. This is an important factor in view of the increasing fluctuations in power generated by renewables.

“Efficient technologies are a key element in curbing climate change with its dramatic consequences,” Hesoun explains.
The high-tech heart of the plant, the Siemens Silyzer 300, has a capacity of six megawatts, and can generate 1,200 cubic meters of green hydrogen. H2FUTURE is an important milestone for the industrial application of electrolysis as a cornerstone for future industrial applications in the steel industry, in refineries, the manufacture of fertilizers, and other industrial sectors requiring large volumes of hydrogen. It creates the basis for future projects on an industrial scale.

“Hydrogen is green, i.e., CO2-neutral, when produced using electricity generated from renewables. It allows us to store intermittent and volatile supplies of electricity generated from renewables such as wind and sun, allowing them to be better utilized,” explains VERBUND CEO Wolfgang Anzengruber.
As a raw material, energy source, and storage medium, green hydrogen could contribute significantly to decarbonizing energy and CO2– intensive processes. There are extremely interesting potential applications in the industrial sector as well as transport, especially for freight and rail transport. Furthermore, responsive electrolysers can be used to provision power grids, offering services for increasingly overloaded transmission networks. H2FUTURE is a prime example of cross-sector cooperation generating added value. “The use of green hydrogen is both a win-win situation for power generation and industry, and a perfect example of sector coupling through electrification.”

“The H2Future project is one of the flagship projects of the FCH JU that aim to help European electrolyser OEMs develop products that are of the quality and capacity required by European industry to reduce its CO2 emissions. Green hydrogen produced through electrolysis, using electricity from renewable energy sources, can be used by industries like steel production, refineries, methanol or ammonia, making their products green.” says Bart Biebuyck, Executive Director of the Fuel Cell Hydrogen Joint Undertaking (FCH JU).

The FCH JU is making up to EUR 12 million of research funding available for the project. In doing so, the European Commission is providing substantial support for implementing climate protection-relevant, innovative projects, and enhancing the competitiveness of European players.
Bart Biebuyck concludes: “Europe is a world leader in the development and manufacturing of electrolysers, thanks also to FCH JU support. However, our global competitors are only few years behind us. The setting in operation of the H2FUTURE electrolysis plant is proof that European industry is keen to ensure that Europe stays in the lead in developing and commercialising novel electrolysers and in greening industry, helping keep investment and jobs in Europe”.